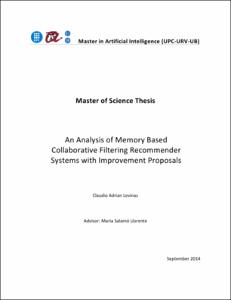 Show full item record
Levinas, Claudio Adrian
Tutor / director / evaluatorSalamó Llorente, María
Document typeMaster thesis
Rights accessOpen Access
Abstract
Memory Based Collaborative Filtering Recommender Systems have been around for the best part of the last twenty years. It is a mature technology, implemented in nu- merous commercial applications. However, a departure from Memory Based systems, in favour of Model Based systems happened during the last years. The Net ix.com competition of 2006, brought the Model Based paradigm to the spotlight, with plenty of research that followed. Still, these matrix factorization based algorithms are hard to compute, and cumbersome to update. Memory Based approaches, on the other hand, are simple, fast, and self explanatory. We posit that there are still uncomplicated approaches that can be applied to improve this family of Recommender Systems further. Four strategies aimed at improving the Accuracy of Memory Based Collaborative Filtering Recommender Systems have been proposed and extensively tested. The strategies put forward include an Average Item Voting approach to infer missing rat- ings, an Indirect Estimation algorithm which pre-estimates the missing ratings before computing the overall recommendation, a Class Type Grouping strategy to lter out items of a class di erent than the target one, and a Weighted Ensemble consisting of an average of an estimation computed with all samples, with one obtained via the Class Type Grouping approach. This work will show that there is still ample space to improve Memory Based Systems, and raise their Accuracy to the point where they can compete with state- of-the-art Model Based approaches such as Matrix Factorization or Singular Value Decomposition techniques, which require considerable processing power, and generate models that become obsolete as soon as users add new ratings into the system.
SubjectsMemory management (Computer science), Machine learning, Gestió de memòria (Informàtica), Aprenentatge automàtic
URIhttp://hdl.handle.net/2099.1/22602
Collections
Share: