Designing and testing of a corona discharge ignition device 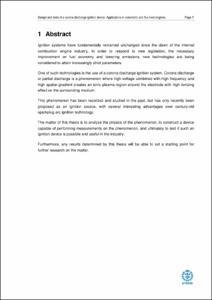 Document typeMaster thesis (pre-Bologna period)
Rights accessOpen Access
Abstract
Ignition systems have fundamentally remained unchanged since the dawn of the internal combustion engine industry. In order to respond to new legislation, the necessary improvement on fuel economy and lowering emissions, new technologies are being considered to attain increasingly strict parameters. One of such technologies is the use of a corona discharge ignition system. Corona discharge or partial discharge is a phenomenon where high voltage combined with high frequency and high spatial gradient creates an ionic plasma region around the electrode with high ionizing effect on the surrounding medium. This phenomenon has been recorded and studied in the past, but has only recently been proposed as an ignition source, with several interesting advantages over century-old sparkplug arc ignition technology. The matter of this thesis is to analyze the physics of the phenomenon, to construct a device capable of performing measurements on the phenomenon, and ultimately to test if such an ignition device is possible and useful in the industry. Furthermore, any results determined by this thesis will be able to set a starting point for further research on the matter.
SubjectsInternal combustion engines, Motors de combustió interna
ProvenanceAquest document conté originàriament altre material i/o programari no inclòs en aquest lloc web
DegreeENGINYERIA INDUSTRIAL (Pla 1994)
URIhttp://hdl.handle.net/2099.1/22547
Collections
Share: