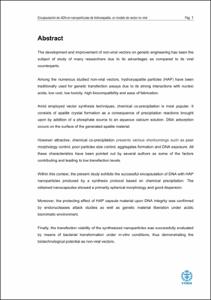 Except where otherwise noted, content on this work is licensed under a Creative Commons license : Attribution-NonCommercial-NoDerivs 3.0 Spain
Abstract
The development and improvement of non-viral vectors on genetic engineering has been the subject of study of many researchers due to its advantages as compared to its viral counterparts. Among the numerous studied non-viral vectors, hydroxyapatite particles (HAP) have been traditionally used for genetic transfection assays due to its strong interactions with nucleic acids, low cost, low toxicity, high biocompatibility and ease of fabrication. Amid employed vector synthesis techniques, chemical co-precipitation is most popular. It consists of apatite crystal formation as a consequence of precipitation reactions brought upon by addition of a phosphate source to an aqueous calcium solution. DNA adsorption occurs on the surface of the generated apatite material. However attractive, chemical co-precipitation presents various shortcomings such as poor morphology control, poor particles size control, aggregates formation and DNA exposure. All these characteristics have been pointed out by several authors as some of the factors contributing and leading to low transfection levels. Within this context, the present study exhibits the successful encapsulation of DNA with HAP nanoparticles produced by a synthesis protocol based on chemical precipitation. The obtained nanocapsules showed a primarily spherical morphology and good dispersion. Moreover, the protecting effect of HAP capsule material upon DNA integrity was confirmed by endonucleases attack studies as well as genetic material liberation under acidic biomimetic environment. Finally, the transfection viability of the synthesized nanoparticles was successfully evaluated by means of bacterial transformation under in-vitro conditions, thus demonstrating the biotechnological potential as non-viral vectors.
SubjectsBiotechnology, Microencapsulation, Biotecnologia, Microencapsulació
DegreeMÀSTER UNIVERSITARI EN ENGINYERIA BIOTECNOLÒGICA (Pla 2009)
URIhttp://hdl.handle.net/2099.1/22478
Collections
Share: