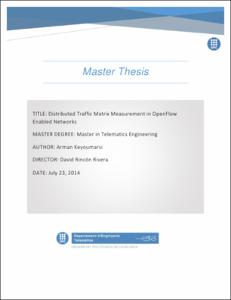 The current network architecture is constrained. The development of new protocols to cope with new demands in computer networks such as real time streaming and voice over IP is not an easy task. Other than developing new protocols, computer networks should be able to rapidly deploy changes across networking equipment. Software-Defined Networking promises to simplify network management tasks and enable rapid developments of new protocols. SDN separates the control plane from the data planes in the switches, bringing a level of abstraction needed to manage sets of switches from a central location. OpenFlow has become a de facto standard for communication between control plane and data planes. One key information for network planning and management is the traffic matrix (TM). TM is defined as the volume of traffic transported by the network during a period of time from any ingress node to any egress node in a network. OpenFlow-based networks in particular must be able to continuously monitor performance metrics, in order to quickly adapt forwarding rules to utilize network resources in the best possible manner. However, current solutions for monitoring either require special monitoring equipment or impose significant measurement overhead. In this thesis, we propose a distributed way of measuring traffic, where every ingress node in the network is responsible for measuring a portion of the traffic matrix. We only used a set of features already available in the latest version of OpenFlow without any need of modification in the platform. Therefore our framework can be deployed on any OpenFlow (version 1.3 or higher) enabled network. The effectiveness of our solution is demonstrated through series of emulation in Mininet and in a test-bed with low-end OpenFlow switches.
SubjectsSoftware-defined networking (Computer network technology), OpenFlow (Computer network protocol), Xarxes definides per programari (Tecnologia de xarxes d'ordinadors), OpenFlow (Protocol de xarxes d'ordinadors)
URIhttp://hdl.handle.net/2099.1/22385