Aerodynamic analysis of the lift reducer device by flow transfer 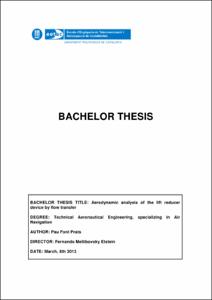 Document typeBachelor thesis
Rights accessOpen Access
Abstract
From the beginnings of aviation and aeronautical world in general, it has searched the goal of creating a machine capable of taking off in a controlled way trying to achieve the highest operational aircraft. Always looking for the highest levels of speed, weight reduction, maneuverability, etc. In the initial stages of the history of aviation, to achieve these objectives, the mankind was witness of the creation of a large number of machines that approached these concepts from completely different paths. Finally, with the passage of the years, reached a basic design and configuration of it had to be a plane. In the following step and until these days, the aviation industry has focused on improving the existing design making it lighter, more maneuverable, with lower fuel consumption, safer and a long list of other improvements. However, always have been projects that have attempted to move away from this basic configuration making improvements, but in most cases they have not reached the success. In the next pages, you will find the analysis and possible implementations of one of these projects.
SubjectsAirplanes--Models--Wings, Aerofoils, Avions -- Disseny i construcció, Avions -- Ales -- Disseny
URIhttp://hdl.handle.net/2099.1/22246
Collections
Share: