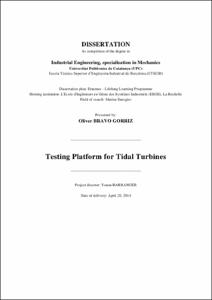 Show full item record
Bravo Gorriz, Oliver
Tutor / directorBarranger, Yoann
Document typeMaster thesis (pre-Bologna period)
Rights accessOpen Access
Abstract
The project Testing Platform for Tidal Turbines is an ambitious and thorough work which was undertaken in September 2013 under the intended purpose of following up and complementing a project arisen in the context of a subject which focuses on the procedure of developing a project from start to end. Additionally, this provides the engineering students a holistic approach to cope with a technological need or demand. The work gathered herein tries to give response to a matter of growing importance all around the globe, but more precisely in the French region of Poitou-Charente. Such matter is the necessity of clean energies that gradually replace part of the energy production, which is currently led by nuclear energy in France. As regards the previous fact, several coastal regions of France are nowadays fostering their tidal industry, among others, in order to share the leadership of this energy transformation. Be that as it may, what are the elements that can contribute to foster the tidal turbine industry in a certain zone? In all likelihood, such a technological business needs to test their new design and components to have a feedback that helps to somewhat link the Finite Element Method assessments with the actual behaviour in a real environment. One of the main troubles when tackling a testing procedure in fields concerning large machinery such as aeroplanes, hydroelectric turbines, vehicles, and so forth, consists in the aforementioned size of the elements to be tested. Generally, the costs of due infrastructure for testing purposes exceed by far the limits which would allow the investment to have final benefit. Therefore, the need for a shared testing infrastructure stems from an economic reason, and so happens in the field that concerns this project, the tidal turbine business. Nowadays, specific projects to build up new testing sites for tidal turbines are carried out in response to the increasing number of new companies that need to test their innovative designs, as the tidal technology is still in its first stage, chronologically speaking. Additionally, according to the awareness of slow tidal currents around the zone in question which are not bound to be sufficient, the need of a platform to accelerate the stream velocity is set as initial hypothesis, even though this is to be verified. In a nutshell, the Testing Platform for Tidal Turbines project is a feasibility study from a technical perspective to build a testing site in the Poitou-Charente to foster the tidal energy industry throughout said zone.
SubjectsTidal power-plants, Turbines -- Design and construction, Centrals mareomotrius, Turbines -- Disseny i construcció
DegreeENGINYERIA INDUSTRIAL (Pla 1994)
URIhttp://hdl.handle.net/2099.1/22103
Collections
Share: