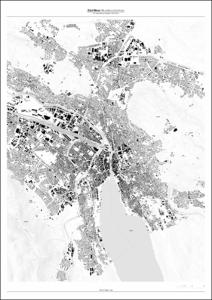 Instead of demolishing the entire Geroldstrasse parcel as the city council is studying to do, the proposal acts just in a 1/3 of it. The idea of allocating in the neighborhood the new university for music studies not only uses the existing infrastructures of the place (train station, exhibition locals, bars) but also provides new services to the area, which are currently non-existent. The strategic section of the building works in a way that the more public, the lower it is the program. While in the ground floor the library and bar are located, the theory and rehearsal rooms are situated on top of it. Besides the synergistic function of the School and the aim that the new cluster will retrieve the rest of the aban¬doned buildings, the position of the volume is strategic in therms of location. It is where the old town (pressed by the Viadukt) and the growing post-industrial Kreis meet. The “meeting” of both natures will be resolved by the occurence of a new urban park. The park would consist on the implantation of a regulated patchwork which would let the nature appear spontaneously but in a certain order. The open areas around the university could at the same time be used for private and non-relate to the school acts. And as the building will complete the empty cir¬cumstance, the preexistences would also complete and take part of the new life created on the inside.
SubjectsConservatories of music, Conservatoris de música -- Edificis