Numerical study of flow past circular cylinder in sub-critial range 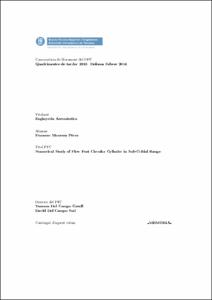 Document typeMaster thesis (pre-Bologna period)
Rights accessOpen Access
Abstract
The present work discusses the validity of the 2D circular cylinder problem in sub-critical range solved with URANS approach. Fluent is used as the numerical software and results are compared in the context of previous results found in the literature and exp erimental in-house PIV measurements. As it has b een found and discussed later in this project, controversy is present in the literature regarding results when URANS are employed in the 2D circular cylinder. However, these turbulence models and 2D assumptions are still used in the industry and hence it is of crucial importance to understand their limitations. Moreover, in the publications, there are some discrepancies regarding the independence of the results. For this reason, in this project, a method for testing the independence of the numerical results is proposed and evaluated, studying the domain, grid density and time-step in a prop osed order. A b etter mesh quality is obtained in this work compared to other meshes found in the literature, which consist in manual adaptation on the separation zone, perfect orthogonality in the boundary layer, utilization of only Low-Reynolds models, which means no wall functions are applied, and an increase of grid points (almost three times as much when compared to previous works). This should lead to a better representation on the separation of the boundary layer. Once the test interdependency has been carried out at Reynolds 3900, di erent URANS models are compared, which are Spalart-Allmaras, Shear Stress Transport and Reynolds Stress models. The three di erent models are tested with a comparison on global parameters and with more detail on the prediction of the components of the Reynolds stresses. With Spalart-Allmaras, the diagonal of the Reynolds stress has been found to be isotropic. With the Shear Stress mo del the diagonal terms are restricted so that the out-of-plane component always lies in the middle of the rst and second comp onent. And with Reynolds Stress model no isotropy is found since each of the components are integrated separately with each transp ort equation. Hence, Boussinesq approximation is found to be signi cantly restrictive in the 2D problem. Comparison with PIV measurements has lead to an under-prediction of the recirculation bubble enforced by the SST turbulence model. For Reynolds 3900, the 3D induced errors are assessed by means of a comparison of the resp ec- tive 2D and 3D case. The bidimensionality of the 3D case has b een found to b e applicable only right in the middle cross-plane, while the cross-planes placed at one quarter and three quarters of the cross length have the maximum cross velo city actuations. Hence, with this study, it can be concluded that sp ecial care must be taken when studying 2D-PIV on the proper placing of the plane under study in order to assume bidimensionality. Further on in this project, a general formulation for obtaining loads only from velocity data is developed. The starting point of the formulation are the Navier-Stokes equations in integral form. Such formulation would allow a non-intrusive load measurement by the combination of the present formulation with PIV measurements.
SubjectsCylinders, Vortex-motion, Computational fluid dynamics, Cilindres, Vòrtexs (Hidrodinàmica), Dinàmica de fluids computacional
DegreeENGINYERIA AERONÀUTICA (Pla 2004)
URIhttp://hdl.handle.net/2099.1/21700
Collections
Share: