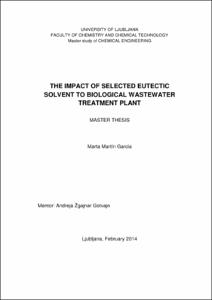 Show full item record
Martín Garcia, Marta
Tutor / directorKrajnc, Matjaz
Document typeMaster thesis (pre-Bologna period)
Rights accessOpen Access
All rights reserved. This work is protected by the corresponding intellectual and industrial property rights. Without prejudice to any existing legal exemptions, reproduction, distribution, public communication or transformation of this work are prohibited without permission of the copyright holder
Abstract
In the recent years, there has been intensive development of non-hazardous solvents and reaction media, able to replace common organic compounds which are possible aquatic contaminants due to their toxicity, volatility and persistency. As a result, eutectic solvents (ES) were introduced and they are used in different processes (bio-transformations, separation). These eutectic solvents (ES) are generally composed of two or three cheap and safe components that are capable of self-association, to form a eutectic mixture with a melting point lower than that of each individual component. However, they could spread widely by wastewaters and affect large areas in terms of chronic toxicity, bioaccumulation, etc. The benefits and drawbacks of these components are currently being discussed. The biological treatment is often used due to its reliability, simplicity and high cost-effectiveness as well providing many advantages in terms of biodegradable matter and nitrogen compounds removal. However, the efficiency of biological processes is strongly limited because of refractory or inhibitory compounds in wastewaters. Aerobic treatment based on activated sludge process, have been widely studied and adopted. The aim of this research focuses on the determination of the impact caused by the addition of selected ES to the aerobic WWTP. We selected the ES based on choline chloride and malonic acid. First, its toxicity to microorganisms of activated sludge was determined by measurement of inhibition of oxygen consumption of activated sludge. It helped to identify the initial concentration of ES in the influent to the pilot WWTP. The experiment was started with setting up pilot aerobic WWTP, feed by synthetic municipal wastewater and its efficiency was monitored by several parameters. After steady-state operation of WWTP was achieved, the selected amount of ES was added in the influent and treatment efficiency was monitored continuously. The amount of the ES was increased to find the highest concentration of the component still possible to treat in the biological wastewater treatment plant. At the end, it has been seen that although the toxicity of ES to microorganisms was so high, the impact to the biological treatment plant at the same concentrations was negligible, obtaining good treatment efficiency in the pilot WWTP.
SubjectsSewage -- Purification -- Biological treatment, Sewage disposal plants, Solvents -- Environmental aspects, Aigües residuals -- Depuració -- Tractament biològic, Aigües residuals -- Plantes de tractament, Dissolvents -- Aspectes ambientals
DegreeENGINYERIA QUÍMICA (Pla 2000)
URIhttp://hdl.handle.net/2099.1/21598
Collections
Share: