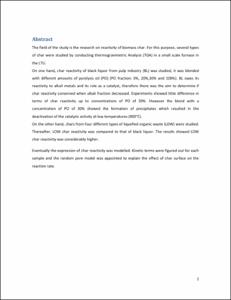 Show full item record
Bach Oller, Albert
Tutor / directorUmeki, Kentaro
Document typeMaster thesis (pre-Bologna period)
Rights accessOpen Access
Abstract
The field of the study is the research on reactivity of biomass char. For this purpose, several types of char were studied by conducting thermogravimetric Analysis (TGA) in a small scale furnace in the LTU. On one hand, char reactivity of black liquor from pulp industry (BL) was studied, it was blended with different amounts of pyrolysis oil (PO) (PO fraction; 0%, 20%,30% and 100%). BL owes its reactivity to alkali metals and its role as a catalyst, therefore there was the aim to determine if char reactivity conserved when alkali fraction decreased. Experiments showed little difference in terms of char reactivity up to concentrations of PO of 20%. However the blend with a concentration of PO of 30% showed the formation of precipitates which resulted in the deactivation of the catalytic activity at low temperatures (900°C). On the other hand, chars from four different types of liquefied organic waste (LOW) were studied. Thereafter, LOW char reactivity was compared to that of black liquor. The results showed LOW char reactivity was considerably higher. Eventually the expression of char reactivity was modelled. Kinetic terms were figured out for each sample and the random pore model was appointed to explain the effect of char surface on the reaction rate.
SubjectsCharcoal -- Reactivity, Charcoal -- Gasification, Biomass -- Gasification, Catalysis, Thermogravimetry, Carbó vegetal -- Reactivitat, Carbó vegetal -- Gasificació, Biomassa -- Gasificació, Catàlisi, Termogravimetria
URIhttp://hdl.handle.net/2099.1/21569
Collections
Share: