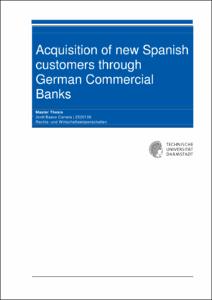 The global economic crisis has led Spain into a dramatic spot. This macroeconomic scene has had negative consequences in terms of the increase in unemployment, loss of confidence in the Spanish banking system, capital flight and the increasing number of evictions, amongst others. This MSc thesis aims to analyse the effects that this economic crisis has had on people’s attitudes and feelings with regard to the Spanish banking sector and the identification of potential clients that German banks could gain by entering the Spanish banking market. The research was carried out using data collected through a written survey given to over 120 people living in Spain. A review of literature on the topic was made to analyse people’s perceptions and impressions regarding the current banking sectors both in Spain and Germany. Literature research shows a variety of parameters that play an important role when analysing peoples’ attitudes, including age, amount of capital invested, type of client, and trust in the banking system, amongst others. The results of the research show that people within the working age group from 18 to 65 years would be more likely to invest their money in a German bank. Therefore, the German banks’ target group could be clients in this age range. They could also target particular clients with a small amount of savings. The main challenges that German banks need to face, if they intend to enter the Spanish market, are that Spaniards are unlikely to travel to Germany to invest their savings and the issue of language. Both of these variables have been identified from the statistical analysis as the two main reasons that deter Spaniards from investing in German banks.
SubjectsInvestment analysis, Depressions, Bank investments -- Spanish public opinion, Foreign bank accounts, Banks and banking, German --Sspain, Anàlisi financera, Crisis econòmiques, Inversions bancàries -- Opinió pública espanyola, Comptes bancaris estrangers, Bancs alemanys -- Espanya
ProvenanceAquest document conté originàriament altre material i/o programari no inclòs en aquest lloc web