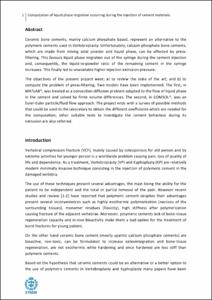 Document typeMaster thesis (pre-Bologna period)
Rights accessOpen Access
All rights reserved. This work is protected by the corresponding intellectual and industrial property rights. Without prejudice to any existing legal exemptions, reproduction, distribution, public communication or transformation of this work are prohibited without permission of the copyright holder
Abstract
Ceramic bone cements, mainly calcium phosphate based, represent an alternative to the polymeric cements used in Vertebroplasty. Unfortunately, calcium phosphate bone cements, which are made from mixing solid powder and liquid phase, can be affected by press-filtering. This favours liquid phase migration out of the syringe during the cement injection and, consequently, the liquid-to-powder ratio of the remaining cement in the syringe increases. This finally led to unavailable higher injection extrusion pressure. The objectives of the present project were: a) to review the state of the art; and b) to compute the problem of press-filtering. Two models have been implemented. The first, in MATLAB®, was treated as a convection-diffusion problem adapted to the flow of liquid phase in the cement and solved by finite volume differences. The second, in COMSOL®, was an Euler-Euler particle/fluid flow approach. The project ends with a survey of possible methods that could be used in the laboratory to obtain the different coefficients which are needed for the computation; other suitable tests to investigate the cement behaviour during its extrusion are also referred.
SubjectsBone cements, Biomedical materials, Tissue engineering, Calcium phosphate, Ciments ossis, Biomaterials, Enginyeria de teixits, Fosfat de calci
DegreeENGINYERIA DE MATERIALS (TITULACIÓ CONJUNTA AMB LA UB) (Pla 2003)
URIhttp://hdl.handle.net/2099.1/21305
Collections
Share: