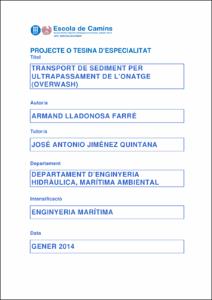 Document typeMinor thesis
Rights accessOpen Access
Abstract
During high - energy episodes, like storms and hurricanes, the coastal line is under an enormous threat, causing several and important changes. Those changes should be computed in order to predict t he response of the beach under high - energy episodes. Overwash , is one of the most important processes and occurs when the water level reach enough height to overtop the beach crest. However, it is really difficult to obtain reliable data on this process . There are several studies, based on field and laboratory data on the literature that have tried to define algorithms to predict those changes, but the scope of these formulas is really limited due to the high amount of processes involved. That is why, the p ercentage of prediction is very low when a formula tries to face all kind of types of data. In fact, there is not a good formula to compute or predict the response of the beach among the models analysed. Gathering reliable data from several studies a new d ata base has been built, and according with this, a new formula has been developed and adjusted. The central core of this formula is based on the overtopping of waves over the beach crest. A focused study on the Catalan coast is done with the new formula d ue to the two predominant types of beaches. One much more flat with smooth slopes and another one with a steeper slope and height beach crests. Finally, the new formula is used to get an order of magnitude of what will happen, in term of flux of sediment, if a high - energy episode occurs on the Catalan coast.
SubjectsMarine sediments, Sediments marins
URIhttp://hdl.handle.net/2099.1/21170
Collections
Share: