The price of anarchy in network creation 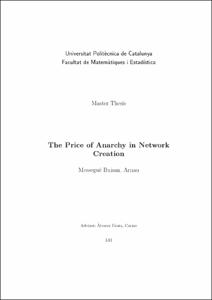 Except where otherwise noted, content on this work is licensed under a Creative Commons license : Attribution-NonCommercial-NoDerivs 3.0 Spain
Abstract
This master thesis focuses its attention in the Sum Classic model introduced by Fabrikant et al. which is a simpli cation of the Internet and can be thought as a Strategic Game. In this model the distinct agents, who can be thought as nodes in a graph, wish to establish links of constant price to the others in order to be connected in the resulting network. Elements of interest are then studied, like equilibria, con gurations where every agent is not interested in deviating his current strategy, or the price of anarchy, a measure of how the e ciency of the system degrades due to sel sh behavior of its agents. After analyzing the work done so far in the area we have developed and proved original results which study the price of anarchy in di erent situations as well as the structure of equilibria. More precisely, given , the parameter corresponding to the cost of buying an edge, we give a new proof that the price of anarchy is constant for = O( p N) (being N the size of the network), we show that the price of anarchy is constant for the bounded degree graphs when = o(N) and we show that the structure of equilibria for < n=C for some constant C is a very restricted one. Also, we study the question of deciding if a given graph belonging to a certain family is an equilibrium and we show that the corresponding decisional problem is polynomial time solvable whenever the family considered are trees or bounded degree graphs.
SubjectsAlgorithms, Algorismes
DegreeMÀSTER UNIVERSITARI EN MATEMÀTICA AVANÇADA I ENGINYERIA MATEMÀTICA (Pla 2010)
URIhttp://hdl.handle.net/2099.1/20834
Collections
Share: