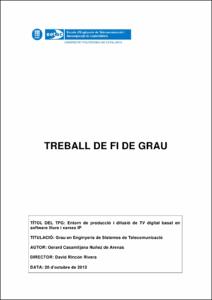 Document typeBachelor thesis
Rights accessOpen Access
Abstract
This degree thesis has focused in the deployment of a professional television environment, based on free software and IP networks, with two main goals: 1)to prove that the scenario is feasible, 2) to test the available software (jointly with some low cost, specific hardware). The work has been carried in two parts. The first one is the acquisition of the signal before been coded, multiplexed and transmitted. The second part deals with codifing, multiplexing and transmission. A standard television production centre includes the following blocks: - Live production - Non lineal production - Playout - Storage - Head-End (coding, multiplexing, and formatting the final signal in order to be transmitted over DVB or IP networks) This thesis will focus on live production, playout and Head-End blocks. After the signal has been generated (for example from a live camera), the playout block performs mixing and the continuity automation, while the Head-End takes care of multiplexing and transmission of the contents. Regarding the broadcasting block, we have experimented with the concept of CDN (Content Delivery Network over IP), to avoid the congestion of the network. Several tests have been made, with the blocks mentioned above, in order to evaluate how the software behaves. In the first block we have worked with a conventional camera and a Decklink card to capture the signal. In the third block, different mixer tests have been carried out with the CasparCG server,and the audiovisual content has been automated from a CasparCG client. In the last block, the signal has been coded and broadcasted as DVB-T, together with some tests of CDN, and finally a HbbTV interactive TV application has been deployed in the scenario. The main result has been to verify that is possible to develop a complete and functional low cost professional television scenario.
SubjectsFree computer software, Linux, Programari lliure, Linux, Televisió digital
DegreeGRAU EN ENGINYERIA DE SISTEMES DE TELECOMUNICACIÓ (Pla 2009)
URIhttp://hdl.handle.net/2099.1/20778
Collections
Share: