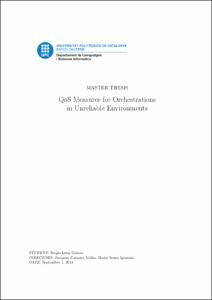 Document typeMaster thesis
Rights accessOpen Access
Abstract
When dealing with Grid applications, there could append a lot of different thinks that could make the final execution differ some times. For example, is over-optimistic to suppose that all the site calls that the Grid application management system does to perform sub-computations are operatives the 100% of the time and no error never happens. Another case, for example is when the final result varies depending on the values returned by the services. When the user accepts this non-determinism, it may be good to give some estimation of success. Here we will see some approaches to this problem based on the Expected number of published values and the Probability of failure on non-recursive Orc expressions describing the orchestration of sites in Grid applications. We will see that in some cases those problems are only tractable under certain conditions and the special case created by the delay of site calls when there are no restrictions on the Orc expressions. After that, a new approach based on the probability of delays will be presented. With this approach we will give a new estimations based on the average time required for values to be published and the time required to publish the first or last value. As an annex, a Java library to compute some of those problems is given and some important points will be seen.
SubjectsComputational grids (Computer systems), Computació distribuïda
DegreeMÀSTER UNIVERSITARI EN COMPUTACIÓ (Pla 2006)
URIhttp://hdl.handle.net/2099.1/20710
Collections
Share: