Analysis of the performance of SWASH in harbour domains 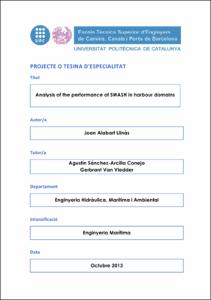 Wave penetration inside harbours has been one the main issues that port planners and engineers have had to deal with in recent years. Wave conditions inside harbours trigger vessel movements; create dynamic loads on port structures and condition harbour exploitation and safety. For this reason in the recent past maritime and port engineers have developed a set of semi-empirical criteria and physical modelling tools to design the layout of breakwaters and other protection structures. Nevertheless, with the development of computers and numerical methods, several models have tried to simulate the propagation of waves inside such restricted domains, affected by multiple competing processes such as diffraction, partial reflection, etc. It is in this framework where SWASH (Simulating WAves till SHore), a model developed by TU Delft, is expected to perform realistic and accurate simulations well beyond the performance limits of other state of the art codes. SWASH solves directly the momentum conservation laws and can deal with dyke geometry and even porosity. It is very suited for simulating non-hydrostatic, free-surface flows, including long-wave generation and short wave propagation. Because of that we shall here evaluate how such a model can simulate the propagation of various types of waves in real harbour cases. The Port of Blanes, located in the Catalan coast with wave measurements available, was chosen as our test case. Previous to the performance of the simulation of the case study, several 1D and 2D simulations were undergone to get acquaint with the model. Furthermore, an exhaustive analysis of the response of SWASH when using porous layers was included. The reason for it was double. On the one hand, to see how the model accounted for porous layers such as dykes and breakwaters. On the other hand, to try to solve the stability problems that the inclusion of those layers may produce. A certain setting when it comes to the numerical discretization of the equations was found to be stable and provide reliable results and used afterwards in the case study of the Port of Blanes. To perform the simulation of the Port of Blanes real case, initially a wave approach with SWAN was performed as the wave data was too far from the entrance of the port. To do so the bathymetry of the surroundings of the port was needed. The output of these simulations was inputted later on in SWASH to do the final stage of the simulation within the port. To do the simulation, an accurate bathymetry of the actual port during the year were the measurements were done was necessary, and a data treatment was done to include the new structures to the out of date bathymetry that could be provided. These simulations accounted for the port structures as porous layers that emulated the partial reflection and transmission phenomena, diffraction and refraction that are present in port domains. The output from the model was then compared to the actual measurements inside the port and a comparison was made. The results show that SWASH can be indeed a rather useful tool for harbour engineering, providing realistic and accurate results. Furthermore, the way the model accounts for porous structures can be considered to be quite flexible and realistic. Finally some conclusions and recommendations for further work in this topic have been drawn. This will set the basis for further development of this numerical tool that could become the cornerstone of port layout planning in the coming years.