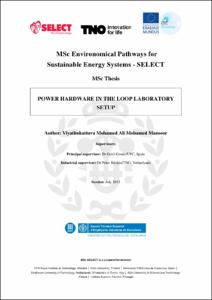 Document typeMaster thesis
Rights accessOpen Access
Abstract
Share of distributed generation in grid system is increasing in time. In conventional generation, rotating mass provides inertia to the grid. Distribution generation causes reduction in inertia of grid system and this inertia reduction is one of the challenges that needs to be addressed in the energy transition phase. The number of challenges related to grid stability will proliferate in the future. Research and Development to solve these challenges is ongoing but the developed solutions need to be tested in real time since the performance of new technology in power scale, would be different from mathematical simulation results. Field tests of future grid solution are cost and time intensive while considering construction of a power system. This challenge can be solved by a concept called Power Hardware-in-the-Loop (PHIL). In PHIL, simulated power system can be emulated in real time using power interface. So, new technology can be connected with an emulated power system for testing in power scale. Since PHIL is an emerging concept, a detailed strategy was formulated for development of PHIL experiment. Frequency Response of a Grid was selected as the focus of power system. In this work frequency response of a power system is emulated in real time using a Real Time System, resistive loads and a power interface with a Motor-Generator set. Triphase interfacing technology is used to interface real time system with hardware. A loop comprising of simulated power system, physical generator and physical resistive load was designed. Real time system and generator mimics emulated power system and the resistive load acted as hardware in the loop. A basic PHIL experiment was successfully completed, in which the change in power of hardware in the loop, affected the emulated power system. Experimental result proves the success of PHIL experiment. Based on experience and knowledge obtained in a basic PHIL experiment, the conceptual design of a more advanced PHIL experiment of a micro grid that includes virtual power plant is developed. Limitations of the Power Hardware in the Loop experiment is found and reported.
SubjectsElectric power system stability, Electric power systems -- Control, Sistemes de distribució d'energia elèctrica -- Estabilitat, Sistemes de distribució d'energia elèctrica -- Control
URIhttp://hdl.handle.net/2099.1/20489
Collections
Share: