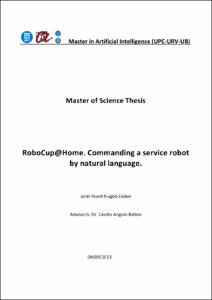 Document typeMaster thesis
Rights accessOpen Access
Abstract
It was in the ancient Greece that myths were written and, among already there one could nd the human desire of robotic servants. It was Hephaestus, god of technology, blacksmiths, craftsmen and artisans who is said to have built robots to help him on his workshop. This show how deep in our thoughts was this desire that one could nd stories and tales of human-shaped machines that danced in china or inanimate materials like mud that gave shape to golems in Jewish tradition. In the renaissance, a lot of automata began to arise, beginning by Leonardo Da Vinci to the artisans from China and Japan, mankind was trying to produce automatic machines, sometimes for their own bene t, some other times to their delight and fascination. But it wasn't until the digital era that the dream began to seem feasible. After millennia of wondering of automated robots, computers showed that automatic calculus was possible and from this, ideas of an automated mind arose. Theories for cognitive architectures are born since the early stages of arti cial intelligence, cognitive architectures that now are a reality. Thanks to the technological advances and the knowledge about the mind, what once was material for ctional tales, now is feasible and only matter of time. There is a lot of research on robotics and cognition that is beginning to get coupled into what are called "service robots". In this thesis, I present a system that participates in a competition designed for this kind of robots. A competition that have on its basis the same dream that humans have had all around the world for centuries: the cohabitation of humans and service automatons.
SubjectsEvolutionary robotics, Robòtica evolutiva
URIhttp://hdl.handle.net/2099.1/20439
Collections
Share: