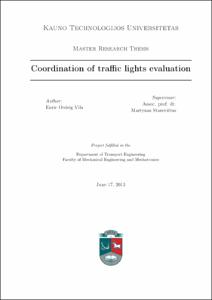 This case study consists in the evaluation of the Kaunas city traffic speed taking into consideration that traffic lights were coordinated. Kaunas suffers from high traffic intensity and, as a consequence, traffic jams often, and happens mainly because the city can only be crossed by the center. Lithuania, as the rest of Europe experienced a big growth, from 1995 to 2005 coinciding with the crisis, that is to say that number of cars increased to highest levels as well as the traffic intensity. Moreover, by comfortability has to be borne in mind that a lot of people prefer to drive by car since takes much less time to get to a place and in cold winters don’t have to reach any bus stop nor waiting for the bus. The city was not ready for such an amount of cars thus generating traffic jams. So that, the aim and main goal of the project is to evaluate one way of clearing the streets and letting the vehicles run faster, which is would be to evaluate its actual theoretical traffic speed, comparing it to experimental ones and calculate it again assuming all traffic lights coordinated. This will allow to see how necessary is the coordination as well as other conclusions regarding objects in infrastructure.
SubjectsElectronic traffic controls -- Evaluation -- Simulation methods, Traffic signs and signals -- Lithuania -- Kaunas, City traffic -- Planning -- Lithuania -- Kaunas, Traffic flow -- Management, Semàfors -- Avaluació -- Mètodes de simulació, Senyalització viària -- Lituània -- Kaunas, Circulació urbana -- Planificació -- Lituània -- Kaunas, Trànsit -- Intensitat -- Gestió