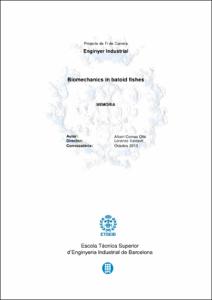 Batoid fishes (e.g., manta rays) are extremely efficient swimmers, combining extreme strength and incredible maneuverability. Replicating these unique properties in synthetic autonomous under-water vehicles would have tremendous implications. Several research groups have been exploring these concepts for the past decade, and a small number of prototypes have been demonstrated. Importantly though, these prototypes match the batoid external motion (in terms of range of motion and actuation force) but do not employ a similar internal mechanics. The configuration of skeletons and muscle structures for a number of different batoid fishes have been recently unveiled, presenting a unique opportunity to analyze the internal mechanics of these complex structures, and ultimately use the acquired understanding to realize truly bio-mimetic underwater vehicles. As a whole wing has hundreds of moving elements, a full finite elements simulation of the entire wing is not feasible. To address this problem, we implemented a numerical model which will represent a part of the entire wing, and we investigated the effects of geometric and materials parameters on its stiffness. The length of each radial and the offset between them are going to be the most relevant variables and hence, the ones tested. Furthermore, to represent efficiently all the wing, we calculated its effective elastic properties using rigorous homogenization theory. These properties could then be used in shell FE models of the entire wing, and capture spatial variation in elastic constants in a numerically efficient way. Within the context of this work, the stiff and compliant direction will be found and that will give us an idea of the ability of the model to capture the experimentally observed deformation patterns. We observe that our 2D homogenized wing model fails to capture the substantial twisting/bending coupling that is observed experimentally. We speculate that the lack of torsional degree of freedom at the joints is responsible for this discrepancy. Once this deformation mechanism is built into a model, future investigations can use the homogenized stiffness approach to extract an effective continuum-based representation of the response of the wing in a continuum shell finite element model. This element can then be used for efficient modeling of entire wings; this will allow efficient modeling of spatially non-uniform wing morphologies in a Finite Elements setting. Once the elastic response of the wing is completely characterized, efforts will need to focus on actuation.
SubjectsBiomechanics, Fishes -- Morphology, Submersibles, Homogenization (Differential equations), Biomecànica, Peixos -- Morfologia, Vehicles submergibles, Homogeneïtzació (Equacions diferencials)
URIhttp://hdl.handle.net/2099.1/20315