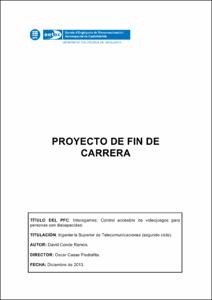 This project presents a new interaction platform for users with disabilities with major commercial videogames consoles. The designed system enables the access to the existing platforms on the market (Xbox 360 , PS3 , Wii and PC) to people who previously couldn't play , improving their entertainment prospects. The solution developed enables the user to use as input devices mices, keyboards and joysticks adapted that they normally use to access to the computer. This implies a reduction of the learning time, a very important consideration when designing products for people with disabilities. The adaptation of the controls and joysticks are complemented with the design of a software. This control software is capable to manage up to four simultaneous inputs and generate the valid actions for each videogame platform in real time. A set of generic macros allows the user to perform complex actions or fast sequences of buttons that with the current devices they couldn't perform. This will implies a fully customizable solution based on the needs of each user, non-invasive and modular, that allows the users to play alone or with their friends to the major videogames in the market. In parallel to the design of the game controller, a joystick HID has been designed. This joysticks lets the users to change the configuration of the inputs/outputs mapping depending the selected videogame . The laboratory tests and the real users reveals a perfect compatibility of the solution with the PC , PlayStation 3 and Wii platforms. However, the Xbox 360 output is still in test phase . The result is a device for people with disabilities that allows the access to videogames to enjoy alone or with friends of the current videogames in the market .
MateriasVideo games -- Design, Accessible Web sites for people with disabilities, Videojocs -- Disseny, Accessibilitat web
URIhttp://hdl.handle.net/2099.1/20274