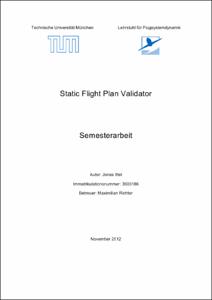 Document typeMaster thesis
Rights accessOpen Access
Abstract
Unmanned Aircraft Systems (UAS) have been successfully used for military purposes for several years. With advancing technology and improving acceptance UAS are expected to become increasingly important in the field of civil aviation. UAS can provide great value by performing missions such as environmental applications, participating in emergency situations and operating as communication relays. If UAS are foreseen to perform such missions in the future, current flight planning specification and execution mechanisms would have to be improved in order to take into account, for example, repetitive and conditional behavior, parametric legs, loitering maneuvers and the inclusion of emergency routes and contingency reactions as part of the autonomous UAS flight plan. The objective of this thesis is to design and program a software tool aiming at fast validating flight plans for UAS. The flight plans are stored in a standardized XML file. The validator itself has been integrated within ISIS (ICARUS Simulation Integrated Scenario), an environment for simulating UAS missions within non-segregated airspace. This thesis presents a first concept for fast validation according to some simple and static rules. The aim of the validation is to give slightly conservative evaluation results for performable flight plans, but in no case mistakenly marking a leg or a flight plan performable. The specific validation requirements are also defined as part of the work and are inspired by existing manned aircraft regulations and recommendations, as well as aircraft specific performance limitations. The two aircraft systems Ikhana and Global Hawk have been integrated into the tool for validation proposes by performing simulations within the X-Plane flight simulator. Based on these simulations a concept has been developed to easily integrate new models or update existing models regardless of the amount of specific data available. To allow someone not familiar with the code or the details of the concept of the validator to execute it easily, this procedure has been standardized and does not require change within the code. A major motivation for these procedures has been that any aircraft must be able to be integrated without specifically knowing any aircraft parameters such as drag coefficient or thrust parameters.
SubjectsDrone aircraft, Avions no tripulats
URIhttp://hdl.handle.net/2099.1/20266
Collections
Share: