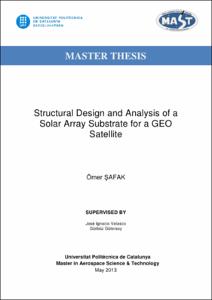 Document typeMaster thesis
Rights accessOpen Access
Abstract
The aim of this thesis is the design of solar array substrate for a geostationary satellite. The design of deployable solar array substrate is realized based on the requirements which are provided by BILUZAY (Bilkent University Space Technologies Research Centre). This array is going to empower a telecommunication satellite which will be operating in a geostationary orbit during 15 years. The main work presented in this thesis consists of two principal directions: solar cell array area dimensioning and structural design and analysis of its substrate under launch loads. First of all, based on the power requirements of the satellite, total area of the solar array is calculated considering eclipse time, worst case scenarios for voltage and power output. Later on based on total solar array area; rigid solar panels are dimensioned according to the solar cells in parallel and series considering spacecraft constraints. Two different geometries are formed considering different number of solar panels in each case. According to the bus voltage and power output, number of solar cells which are connected in parallel and series are calculated for each panel. Solar panel deployment mechanism solutions are evaluated according to their advantages and disadvantages. A trade-off analysis between proven deployment mechanism solutions is performed to be able to choose best convenient mechanism.
SubjectsGeostationary satellites, Satèl·lits geostacionaris
URIhttp://hdl.handle.net/2099.1/20260
Collections
Share: