Study of pedestrian impact on headlamp 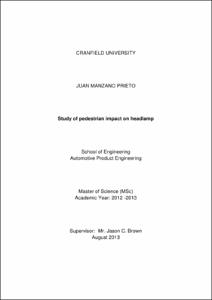 Show full item record
Manzano Prieto, Juan
Tutor / director / evaluatorC. Brown, Jason
Document typeMaster thesis (pre-Bologna period)
Rights accessOpen Access
Abstract
The main objective in this pedestrian impact study is a correlation between the computer simulations and the basic pendulum test rig in order to propose solutions that may improve the compliance of the headlamps without affecting their basic performance. Firstly, a tensile test at three different velocities was conducted to study the strain caused by applying a load within a certain time over a dog-bone specimen and the strain rate dependency of polycarbonate was demonstrated. Despite creating a LS-DYNA model and a material card, the decision was to use the material card provided by JLR for conducting the numerical simulations. Later, five impact test simulations were conducted for two different scenarios. The first one was with the headlamp fixed on its four attachments but it resulted that the fracture of the mountings, even with a low impact energy of 50J. As a consequence, EPP foam is used as the support in the second scenario. Then, a pendulum test rig was designed, built and used for impact tests. Unfortunately, due to the problems with the pendulum structure, only the 50J test was conducted. Four tests were made in order to have enough data to correlate the numerical simulations with the impact tests. The pendulum was instrumented with 1kN and 5kN load cells, which were statically calibrated and connected to a data acquisition system to obtain experimental data. A correlation stage was held and it was noticed that the peak value of the impact force did not match the simulated result. This may have been partly due to the low data acquisition rate achievable in the available instrumentation. Finally, a parametric improvement study involving three different design parameters is proposed. As a valid correlation was not achieved, these improvements were not conducted and are recommended for future studies.
SubjectsAutomobiles -- Lighting -- Design, Pedestrian accidents -- Prevention, Automòbils -- Enllumenat -- Disseny, Vianants -- Accidents -- Prevenció
URIhttp://hdl.handle.net/2099.1/20161
Collections
Share: