Design of a microclimate for improving thermal quality 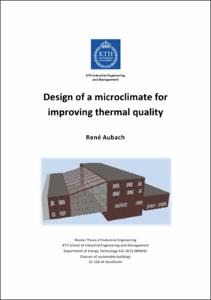 Except where otherwise noted, content on this work is licensed under a Creative Commons license : Attribution-NonCommercial-NoDerivs 3.0 Spain
Abstract
The idea of benefiting from a glasshouse to create a local microclimate between two buildings is not new, around 1985 such a multi-occupancy block was built in Hagsätra, in the south of Stockholm. Four buildings were constructed around a glazed courtyard which acts as a large solar collector. It is clear that in comparison with conventional buildings, glazing gives more temperate space “for the same price”. The idea is that a glass building offers an indoor quality that can be profited for having a comfortable space enjoyable by people throughout the year. The energy required for conditioning it depends on the activity that wants to be performed inside. In this thesis, a glass structure consisting of a roof and two frontal façades was simulated using the simulation programme DesignBuilder 3.0.0.105. The model is based on a real proposal for covering the space between two existing buildings in KTH main campus. Different possibilities concerning the indoor climate related to the activity that wants to be set in it have been simulated. The selected option has no mechanical ventilation and no supply of cooling since it is provided of a natural ventilation system designed for evacuating the warm air when the microclimate reaches temperatures above the comfort level. A heating system has been installed to maintain the indoor temperature to a minimum of 5oC. The results showed that when selecting the glazing of the microclimate special attention has to be put to the g-value. It influences significantly the maximum temperature that can be reached inside and it affects the energy demand as well. Choosing a very high or a very low g-value can suppose a difference of 5oC concerning the indoor temperature. At the same time, using very high g-values can suppose a 30% reduction in energy bills comparing to the use of low g-values which act as if they had a shading device incorporated. Finally, installing high reflectance-low transmittance shades can help to reduce the indoor temperature up to 3oC which can help to avoid overheating problems caused by the use of high g-values. A microclimate makes the average temperature per month increase comparing it to the outdoors. The increase is larger when the number of hours with sun is higher. During months with virtually no sun at all, the microclimate has only marginally higher temperature than the outside temperature. At night or at other times when there is no sunshine, the temperature is also a few degrees above the outside temperature due to the influence of the two adjoining buildings which act as a big thermal mass trapping the heat. However, when the sun is out, the differences between the temperature in the microclimate and outdoors may be between 8oC and 10oC.
SubjectsMicroclimatology, Glass construction, Sustainable buildings, Greenhouses -- Environmental engineering, Dwellings -- Energy consumption, Microclimatologia, Façanes de vidre, Construcció en vidre, Edificis sostenibles, Hivernacles -- Enginyeria ambiental, Habitatges -- Consum d'energia
URIhttp://hdl.handle.net/2099.1/20115
Collections
Share: