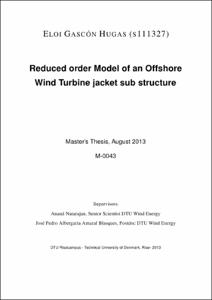 With wind farms being installed in deeper water depths new topologies of structure are used as substructure. A good solution is a jacket substructure that can be cost effective for water depths up to 60m. To make a finite element model of a jacket structure with , in this case, 84 different members requires a number of degrees of freedom much higher than a monopile model consisting of only one beam. When simulating the time response in an aeroelastic sotware, Hawc2 in this case, the high number of degrees of freedom will increase the computational time by a factor of around 6 compared to a monopile. This increase in the computational time slows the process of designing and validating the installation for the offshore wind turbine. In order to solve the problem an Euler-Bernoulli finite element model of the jacket is made, this is reduced by means of the Craig-Bampton method and the natural frequencies and mode shapes are checked to match the original model. The reduced model is coupled to the turbine and the natural frequencies and mode shapes are checked again to match the offshore wind turbine with the original jacket. The load analysis is made for two load cases at 6 and 14m/s, the aerodynamic loads, loads at the tower bottom and at two points of a leg are compared with both models. The mode shapes and natural frequencies are well approximated with the jacket and its reduced model when not coupled to the other parts of the structure. When coupled error is introduced in the natural frequencies on the fore-aft and side to side modes of the structure and in the logarithmic decrement of 1st, 2nd, 6th and 7th modes corresponding to fore-aft and side to side and tower displacements. The aerodynamic loads are not affected for the reduction while the loads on the tower bottom are influenced by the effects of damping but are essentially accurate both in mean and standard deviation. Loads in the jacket are found not to be representative of the real loads on the structure.
SubjectsOffshore wind power plants, Wind turbines -- Desig and construction -- Mathematical models, Finite element method, Parcs eòlics marins, Aerogeneradors -- Disseny i construcció -- Models matemàtics, Elements finits, Mètode dels
URIhttp://hdl.handle.net/2099.1/20069