An Analysis of incentives mechanisms and evaluation on BitTorrent 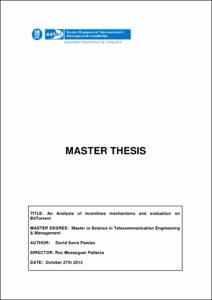 Document typeMaster thesis
Rights accessOpen Access
Abstract
Since the first peer-to-peer communities appeared, their number of users has increased considerably owing to the benefits they offer compared to their alternative architectures in the sharing and distribution of multimedia content. However, due to its distributed nature, they can suffer an important problem of misuse: free-riding. Free-riding consists on users consuming resources without contributing to the system. Such behaviour not only is not fair for the rest of the users, but also threatens the success of this type of nets. With the motivation to avoid free-riding, the mechanisms of incentives were born. They provide the system with a method to motivate the nodes and make them share their resources with the other users. In one word, they provide the net with the needed fairness to achieve a good performance for all users. This thesis is organised in two main parts. In the first part there is a comprehensive study of the state of the art regarding the incentive mechanisms, resulting in a classification depending on the characteristics of the studied algorithms. That study provides the reader with a first sight of the strengths and weaknesses of each algorithm. In the second part there is a test scenario based in the virtualization of machines that was useful to evaluate empirically some of the studied algorithms. Finally, a series of experiments were carried out in order to compare some characteristics of these algorithms and thus verify or deny the conclusions resulted in the study of the state of the art.
SubjectsPeer-to-peer architecture (Computer networks), Downloading of data, Xarxes punt a punt (Xarxes d'ordinadors)
URIhttp://hdl.handle.net/2099.1/19976
Collections
Share: