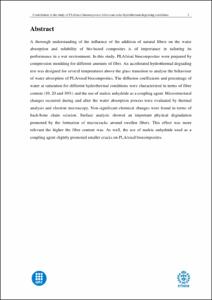 ; Ribes Greus, Amparo
Document typeMaster thesis
Rights accessOpen Access
Abstract
A thorough understanding of the influence of the addition of natural fibers on the water absorption and solubility of bio-based composites is of importance in tailoring its performance in a wet environment. In this study, PLA/sisal biocomposites were prepared by compression moulding for different amounts of fiber. An accelerated hydrothermal degrading test was designed for several temperatures above the glass transition to analyse the behaviour of water absorption of PLA/sisal biocomposites. The diffusion coefficients and percentage of water at saturation for different hydrothermal conditions were characterized in terms of fiber content (10, 20 and 30%) and the use of maleic anhydride as a coupling agent. Microstructural changes occurred during and after the water absorption process were evaluated by thermal analysis and electron microscopy. Non-significant chemical changes were found in terms of back-bone chain scission. Surface analysis showed an important physical degradation promoted by the formation of microcracks around swollen fibers. This effect was more relevant the higher the fiber content was. As well, the use of maleic anhydride used as a coupling agent slightly promoted smaller cracks on PLA/sisal biocomposites.
SubjectsNatural fibers -- Deterioration, Microstructure, Fibrous composites -- Deterioration, Materials -- Biotechnology, Fibrous composites -- Permeability, Fibrous composites -- Thermal properties, Fibres naturals -- Deterioració, Microestructura, Compostos fibrosos -- Deterioració, Materials -- Biotecnologia, Compostos fibrosos -- Permeabilitat, Compostos fibrosos -- Propietats tèrmiques
URIhttp://hdl.handle.net/2099.1/19870
Collections
Share: