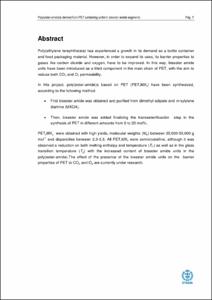 Document typeMaster thesis
Rights accessOpen Access
Abstract
Poly(ethylene terephthalate) has experienced a growth in its demand as a bottle container and food packaging material. However, in order to expand its uses, its barrier properties to gases like carbon dioxide and oxygen, have to be improved. In this way, bisester amide units have been introduced as a third component in the main chain of PET, with the aim to reduce both CO2 and O2 permeability. In this project, poly(ester-amide)s based on PET (PETxMXy) have been synthesized, according to the following method:  First bisester amide was obtained and purified from dimethyl adipate and m-xylylene diamine (MXDA).  Then, bisester amide was added finalizing the transesterificación step in the synthesis of PET in different amounts from 0 to 20 mol%. PETxMXy were obtained with high yields, molecular weights (Mw) between 35,000-50,000 g mol-1 and dispersities between 2.3-3.3. All PETxMXy were semicrystalline, although it was observed a reduction on both melting enthalpy and temperature (Tm) as well as in the glass transition temperature (Tg) with the increased content of bisester amide units in the poly(ester-amide).The effect of the presence of the bisester amide units on the barrier properties of PET to CO2 and O2 are currently under research.
SubjectsPolyethylene, Gases -- Filtration, Permeability, Filters and filtering, Polietilè, Gasos -- Filtració, Permeabilitat, Filtres i filtració
DegreeMÀSTER UNIVERSITARI EN POLÍMERS I BIOPOLÍMERS (Pla 2009)
URIhttp://hdl.handle.net/2099.1/19815
Collections
Share: