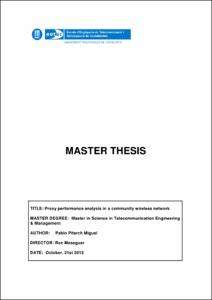 Document typeMaster thesis
Rights accessOpen Access
Abstract
Since the connection to the Internet has becoming a fundamental issue to the development of the society more and more improvements and new access technologies have appeared. Guifi.net proposes a free, neutral and open community wireless network with the principal aim to arrive to users that doesn't have many other options. The optimization of the resources of the network becomes more important for this kind of connections. This study pretends to analyze and learn the behavior of the principal Internet access figure of this network, the proxies. This network element allows to the final user that is properly registered to access Internet with an authentication. Proxies in Guifi.net are administrated by organizations and public institutions and they are commonly federated what means that all the users registered in a proxy can access to another federated proxy with the same authentication. So, final users have several options to connect. To proceed with the performance analysis of these network elements two differentiated stretches have been defined, the step between the final client and the proxy and the step between the proxy and the web server where the content is. To analyze the first stretch, ping tool has been used while to analyze the second step wget tool has been selected. Ping is based in the IP layer meanwhile wget works in the TCP layer so some readjustment have to be done to compare the results obtained. In this sense, a calibration of the ping method with a TCP based tool as iperf has been applied, doing the test to some iperf servers available in the network. The required figures to evaluate the performance are latency, throughput, packet loss, intermediate nodes between client and proxy and distance. Tests reveal that not all the federated proxies are available to a single user due to the singular topology of the network. Also reveal that there is a direct connection between the number of intermediate nodes and the latency, throughput and packet loss performance, meanwhile distance doesn't follows any relation. So, it is possible to conclude that for these tests the proper criterion for the proxy election is the number of intermediate nodes instead the distance which is the commonly used.
SubjectsWireless communication systems., Comunicació sense fil, Sistemes de
URIhttp://hdl.handle.net/2099.1/19710
Collections
Share: