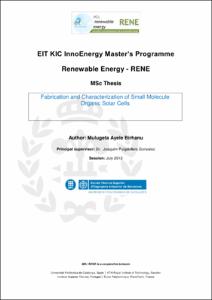 Document typeMaster thesis
Rights accessOpen Access
Abstract
With increasing price of natural gas and petroleum products and their environmental concerns, alternative energy sources are required i.e. renewable energy sources. Solar energy is the abundant form of renewable energy. In addition to that, the total amount of solar power that incident on earth for an hour can cover the world’s annual electric power demand. Hence capturing even fraction of this abundant power source is vital. The technologies used to capture solar power are the photovoltaic systems which, through the photovoltaic effect in semiconductors in the solar cells comprising the system; convert the energy in the photons of the sunlight directly to electric power. The system with silicon solar cells has high production cost because of which it has been difficult for the system to be in to grid parity. The best alternative that attracted the attention of many researchers in the world is to use organic solar cells. Unlike their inorganic counterparts; the organic solar cells are easy and cheap to fabricate, light weighted, flexible, the semiconductors are tuneable with respect to their functions, colourful, can absorb light in cloudy days and semitransparent. The amount of semiconductor material required is very small (i.e. in 100nm). Because of these, even with half efficiency of inorganic ones can make them economical. The other advantage is that they can be used in areas where silicon solar cells haven’t been used and properties like light weightiness, flexibility and colourfulness are required. This could be in the sports, agriculture, medical sector …. However, they have disadvantages: low efficiency and shorter life span due to degradation of the semiconductors. Some of the factors that determine performance of solar cell are the type of structure used for the active layer of the solar cell and its thickness. The two kinds of structures we used in the lab were the bi-layer and bulk-junction photoactive layer. The performance of the bulk-junction solar cells increase with thickness of the photoactive layer up to certain point due to high intimacy of contact between the donor and acceptor and from this point on wards the performance decreases as recombination starts to dominate the effect of the intimacy of contact. Comparison of the bi-layer and bulk-junction solar cells for certain thickness tells that the bi-layer has higher fill factor and open circuit voltage than the bulk-junction due to relatively low recombination and density of states. The efficiency of organic solar cells is increasing at higher rate recently as researches have been taking place even in big named companies. The degradation of the organic semiconductors is due to oxygen and water valour from air which can be avoided by encapsulation of the solar cells.
SubjectsPhotovoltaic power generation, Solar cells -– Materials, Solar cells -- Design and construction, Organic semiconductors, Energia solar fotovoltaica, Cèl·lules solars -- Materials, Cèl·lules solars -- Disseny i construcció, Semiconductors orgànics
URIhttp://hdl.handle.net/2099.1/19686
Collections
Share: