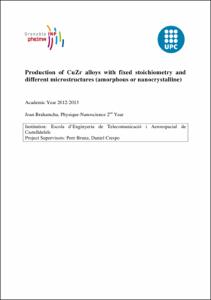 Document typeMaster thesis
Rights accessOpen Access
Abstract
Glasses are solid materials characterized by their lack of long range order, that is, solids with a liquid-like structure. Besides the common silica-based glasses conventionally used in windows, glasses obtained with metallic elements can also be produced, the so-called metallic glasses (MGs). Metallic glasses can only be produced from the melted alloy using a extremely high cooling rate (of the order of 106 K/s), thus limiting the metallic compositions that are able to become glasses. The CuZr system is particularly useful because it can form glasses in a wide range of compositions, from 20 at.% Cu to 80 at% Cu. In order to study the transition from liquid to glass (the glass transition) it is useful to study the atomic dynamics of the glass and compare it with the atomic dynamics of a similar crystal. The problem with metallic glasses is that the initial amorphous phase usually have a different stochiometry than the crystal produced from this phase after a particular heat treatment, thus making the comparison impossible. Moreover, the final crystallization products usually contain more than one phase and then its dynamics is a mixture of the crystal dynamics of these several phases. The aim of this project is to find a CuZr composition able to produce a glass that crystallize in a single phase with the same stochiometry than the original glass. To do that, a study of the phase diagram for the CuZr system will be studied and according to it the compositions will be selected. After that, the metallic glasses will be produced using the arc melter and melt spinning technique and the resulting glasses will be thermally characterized using Differential Scanning Calorimetry. Finally, the glasses will be crystallized and X-Ray Diffraction will be used to identify the crystalline phases and compare them with the original amorphous structure. As a second objective of the project, several glasses of the CuZr system will also be produced but using non-pure Cu obtained from industrial residues. The purpose of this objective is to demonstrate that metallic glasses can be obtained using raw elements without 99.99 at% purity, thus reducing the costs of fabrication. This fact together with the possibility of recycle industrial residues increase the economic viability of metallic glasses and it could extend the range of applicability of this type of materials.
SubjectsGlass transition temperature, Metallic glasses, Glasss, Amorphopus materials, Crystallization, Cristal·lització, Vidres metàl·lics
URIhttp://hdl.handle.net/2099.1/19240
Collections
Share: