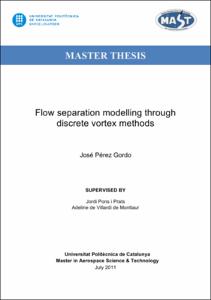 The objective of the present Master thesis is to develop a flow separation model for airfoils (2D problems) in order to overcome the limitations of classical potential models where flow separation is not allowed. This is done through a meshless methodology called full cloud vortex method. This method computes the solution in several steps. First one, the airfoil is discretized in panels and through classical potential methods, the vorticity over each panel is obtained. After that, the vorticity is concentrated in a single point and shed at a certain distance of the panel. Next step consists on the convection of this vorticity points under the influence of the flow field, the panels and the other vortices. In order to increase the accuracy, the final position is obtained from the computed velocity through a forward 2nd order integration method. In order to cope also viscous effects, a simple method to compute the diffusion of the vorticity of each shed vortex is also implemented. Finally, the pressure coefficient of each panel and the forces acting on the whole airfoil are computed. Once the forces are obtained, a dynamic analysis is carried on. In order to do that, a simple 2 degrees of freedom spring-mass-damper model is implemented. From it, the position, velocity and acceleration of every node of the discretized airfoil is computed. The velocities and accelerations are obtained through a 2nd order finite differences scheme. All the equations are implemented in Fortran, and the final program is introduced in a pre-post processor called GiD, which allows to generate the geometry, discretize it and set all the needed parameters up for for running the simulations. Finally, in order to test the code, three geometries are tested: A cylinder, a symmetric airfoil (NACA0012) and a non symmetric airfoil (NACA4412). The results obtained are compared with experimental results in order to check the correct behaviour of the code. In all the 3 simulated geometries, the results are in good agreement with the experimental ones.
SubjectsFluid dynamics --Mathematical models, Vortex-motion --Mathematical models, Dinàmica de fluids
URIhttp://hdl.handle.net/2099.1/19192