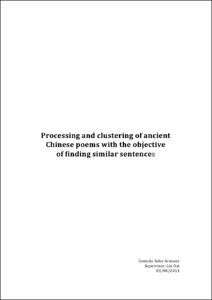 The objective of this project is to create a program that processes a set of ancient Chinese poems, reading them from a text file and storing them into data structures, so that they can be used to find similar sentences to a text the user will introduce. In order to achieve this they are broken into sentences, which are clustered (always keeping track of which poem they belong to), using a tf-idf score system between them to establish their similarity. Similar sentences will be found checking the similarity between the words they contain to the provided text. The clusters are calculated with a modification of hierarchical clustering, following the same principles, but limiting clustering to four sentences maximum. This way, a small set of similar sentences can be provided to the user instead of just one sentence similar to the text he inputted. Four clusters will be provided, the ones to which the most similar sentences belong to
SubjectsTranslators (Computer programs), Chinese poetry--Translations, Traductors (Programes d'ordinador), Poesia xinesa -- Traducció
URIhttp://hdl.handle.net/2099.1/19079