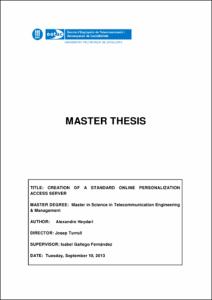 ; Turull, Josep
Document typeMaster thesis
Rights accessOpen Access
Abstract
This final project consisted in improving the production performance of the Barcelona site. In order to achieve this, I had to investigate and analyze the current systems, processes and software, and make all necessary changes and updates that were needed. I first looked at one process, which was the quality control process, and then looked at the personalization process, which was the actual production of the smart cards. In order to not affect real production, because making a mistake could have cost the company a stop in their daily production, the Production Manager let me have an unused computer to run my quality control tests. Once all clients were validated, I deployed the new system onto the production shop floor and saved the operators lots of time, which meant an increase in production. I used the analysis before and after to compare the results and prove that production was indeed increase and that the time of the operators work was reduced. The second part of the analysis had to be done on the machines because this was the actual production. I updated all software, the infrastructure in terms of connection to the servers, and the mechanics, and ran tests. I also used the before and after analysis to compare the results and proved that production was increased by a lot, and that the delivery time of the cards was reduced between one to two hours. Once all clients were validated with the new infrastructure and the results came out positive, I deployed it into the shop floor and production noticed a big change and the performance of the machines was at its optimum. During the project, I encountered many problems, and the most important part was the communication and organization between my project and production. The project had to be without mistakes because the impact could have been huge. In conclusion, three main objectives were set for this project. Reorganizing and recreating the entire software infrastructure along with a deep study of production optimization, a detailed view of the possible actions to be performed were analyzed. The following main areas were the objectives of this project: - Reduced delivery time of the daily card production to the customer (SLA) - Increased production capacity of the personalization center - Possible changes in equipment to improve the response of the two anterior points
SubjectsInternational finance, Finances internacionals, Bancs
URIhttp://hdl.handle.net/2099.1/19042
Collections
Share: