Development of active camera stabilization system for implementation on UAV's 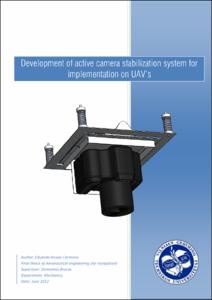 This project is based on a mechanical design of a system to control the movement of a camera located within a non- manned aerial vehicle. The pieces which are involved in the dispositive assembly must be designed in order to comply to the aircraft model properly. Furthermore, it is necessary to include a system to get camera stabilization as well as absorption of the vibrations whether a good quality pictures is reached. Initiating the project, the available dispositive and the characteristics which those are provided are going to be shown in this study. Moreover, analyses on the mechanisms and solutions which can be found currently have been done as well as a comparison between all of them toward to define which dispositive would be adapted to our requirements. In particular, the system that is presented here and it has been designed could be able to effectuate a rotation which comprises a range from 20º to -20º in the axes X and Y, providing the camera of a major visual area. On the one hand, the movement is carried out by the servos which are the active elements in charge to the camera rotation whereas the rest of the systems such as shock absorbers or mobile arms result to be the passive mechanism. In addition a programmable controller board has been used in order to get a control of the servos in both axes X and Y among other utilities such as GPS or maneuver the aircraft.
SubjectsDrone aircraft -- Control systems, Avions no tripulats
URIhttp://hdl.handle.net/2099.1/19021