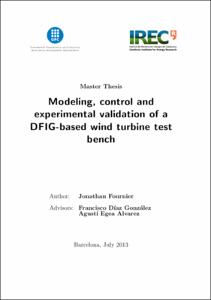 Except where otherwise noted, content on this work is licensed under a Creative Commons license : Attribution-NonCommercial-NoDerivs 3.0 Spain
Abstract
The penetration of wind energy has been fast increasing during the last decade across the world. In order to maintain and improve this growth level, the EWEA introduced a wind research and development plan: the European Wind Initiative (EWI). It aims, among others, at making onshore and o shore power the most competitive energy source and reach wind en- ergy penetration levels of 20% by 2020 and 50% by 2050 [7]. Because of this growing penetration and given the high variability of wind speed pro- les and the consequent energy shortage, regulations have been established by the transmission system operators to de ne the parameters that must be met by power plants connected to the electric network such as ride-thru requirement and voltage regulation. As mentioned in a EWEA report published in 2013 [6], one of the main advantages of wind energy is its ability to contribute to the system opera- tion and exibility. Indeed, a variable-speed turbine equipped with power converters has the ability to control the ow of reactive power and inject it into the grid in periods of voltage drop to contribute to voltage stabiliza- tion. The possibility to capture a greater amount of energy by adapting the turbine speed to the wind velocity is another important motivation behind the growing share of variable-speed turbines (VSWT). Among the di erent VSWT topologies, the DFIG system is of special interest given its high energy e ciency and controllability but especially because of the low power rating - and lower cost - of its power converters that only need to process one third of the rated turbine power [22]. Several di erent control methods exist to control the active and reactive power ows through these converters. Some of these algorithms will be presented in this report and implemented both in a software simulation and on a wind turbine test bench.
URIhttp://hdl.handle.net/2099.1/18983
Collections
Share: