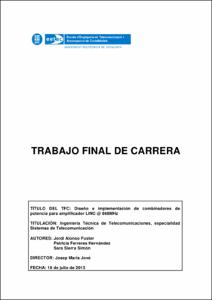 Document typeBachelor thesis
Rights accessOpen Access
Abstract
The ISM is a free band generally used in the environmental scientific and medical study. The regulation depends on the government of each country. This study is focused on the European¡¯s level frequency of 868 MHz, this frequency does not require standards or permissions, as long as they do not exceed the regulations. The project was based on the realization of a LINC transmitter with class E amplifiers made of passive matching networks. Also, the design and production of three combiners: Hybrid 90¨¬, Wilkinson and Chireix. In this project we have seen the different existing types of amplifiers (Class A, Class B ...) and the two main transistors that we can find in the market (BJT and FET). The amplifier¡¯s design was done using the ADS program from Agilent, and to characterize matching networks we have used the Smith Chart and ADS LineCalc. The first thing was find the polarization voltages, to characterize the S parameters of the transistor. The stability calculations have been made as theoretical as graphically (ADS). Matching networks are realized with passive elements such as coils and capacitors, that has been the difference of previous studies. At this point of the project the tunning tool was used to refine the results. The Bias Network were designed with shock coils and decoupling capacitors. The last step was the design of the layout with ADS software and then assembled. The other branch of the study has been the design and implementation of three combiners, for the simulation of both the ADS program was also used and finally took the design to a board. The results obtained for the amplifier with matching networks made of passive elements were good only for one channel. For this reason we have had to continue the combiners study with a project implemented earlier by another student, made with ¥ë / 4 lines. As we have seen in the laboratory, the Chireix combiner is positioned as the most efficient and which allows the maximum gain. Future studies may try to improve the performance of a class E type LINC amplifier with stable matching networks made of passive elements, as well as, improve the efficiency of the Chireix combiner and open new ways of study.La banda ISM es una banda libre que generalmente se usa en el estudio medioambiental, científico y médico. La normativa depende del gobierno de cada territorio. Este estudio se ha centrado en el ámbito europeo a la frecuencia de 868 MHz. Esta frecuencia no requiere de estándares ni permisos siempre que no supere la normativa.
SubjectsAmplifiers (Electronics), Amplificadors de potència
URIhttp://hdl.handle.net/2099.1/18900
Collections
Share: