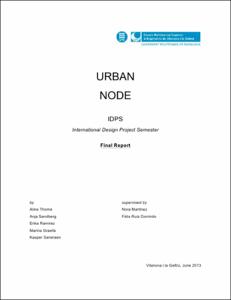 ; Ruiz Gorrindo, Félix
Document typeBachelor thesis
Rights accessOpen Access
Abstract
The beginning of the project consisted of creating the framework for the urban node. First it was decided to use the beach promenade as scene for the prototype and assume full access to the local fiber network. Also it was assumed that the urban node could draw power from the local electricity network when needed and sell back excess power generated. The project brief can be boiled to the following definition of the urban node: • Generate more energy than it consumes • Intelligent lighting • Distribution of WIFI from local fiber network • Aesthetically and contextual appropriate • Modular design • Sustainable design • Use of ICT1 to gather local information The idea is to have an interior system consisting of three different elements: a power unit delivering and controlling renewable energy, an acquisition unit to obtain inputs from sensors and users and a brain unit to analyze and interpret these impulses into useful and accessible data In order to comprehend the needs that should be addressed by the urban node, relevant topics were researched, such as demographics, human factors, state of art, smart cities etc. After compiling the research it was translated into a function analysis, which is the guideline for the current design of the urban node. With the function analysis as a guideline several shapes were investigated to see how they would function as a shell for the features earlier selected. After a design was chosen, an emphasis on completing this very same design was put.
Description
Treball desenvolupat dins el marc del programa 'International Design Project Semester'.
DegreeGRAU EN ENGINYERIA DE DISSENY INDUSTRIAL I DESENVOLUPAMENT DEL PRODUCTE (Pla 2009)
URIhttp://hdl.handle.net/2099.1/18881
Collections
Share: