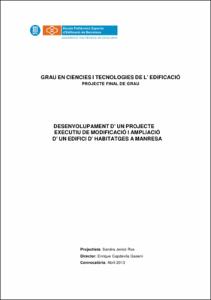 [ANGLÈS] The purpose of this Final Project is to justify the knowledge that I have acquired during the different periods of my career. It conveys the expertise and education obtained during my Degree in Technical Architecture, its development during a post degree in Science and Technology Edification and also an ulterior real-scale project in which I took part as a member of both the university's management team and an architectural firm's team. The aim is to expose all the improvements and editings needed during the phases of projection and construction of a specific building. This building in particular has previously been erected following the standards of a distinct type of construction. Due to a change of property, work has been discontinued with only the foundations put together. At this point a new project manager and a new director took over the project. Not only did they increase of the size of the building but also they did change the structure system and the interior's layout from the original project. The construction plan is for a four storey semi-detached building with ground floor. The ground floor consists in an empty room with no stablished purpose. The above four storeys are meant to be 6 apartments. Despite the fact of the reduced size of these apartments they are all under the current housing regulation. The building will also have a walking rooftop where the necessary installations will put into place. The methodology followed to carry out what I define as “Project of amendment and extension of a multifamily building located in Manresa's old town” will follow several format guidelines with two distinguished parts. First part concerns the academic work and the second part concerns he working project. From the field data base obtained from the foundations we will determine a new type of structure and architecture for the building. We will calculate the strength of the new structure using the program SAP 2000. The program will create a three dimensional model where will be able to add the architectural model of the existent foundation. We will also get dimensions of the structural sections using the Prontuari informàtic de la EHE. In relation to the general installations (pipelines, drainage, solar panels...) we will follow the legislation stablished prior to the application of the Technical Building Code. This is due to the request of the building permit which is prior to the start of its application. Therefore, we find ourselves in-between periods where the only necessary request is the fulfilment of the solar energy's bylaw. We will explain the constructive systems used and finally, we will expose the reasons why we have made such changes. These changes will result in the creation of a building with an unusual living space for the use of mobile partition walls. Once the project is finished we can conclude that with a change in the materials, a minimum space to live in and the integration of unconventional techniques of distribution we can achieve to lower the cost of the construction and also increase both well-being and the profitability of small spaces.
SubjectsBuilding management, Dwellings--Remodeling, Arquitectura -- Projectes, Habitatges--Remodelació