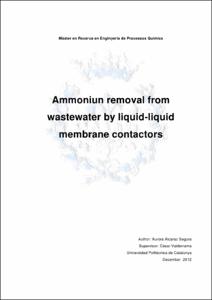 Except where otherwise noted, content on this work is licensed under a Creative Commons license : Attribution-NonCommercial-NoDerivs 3.0 Spain
Abstract
Removal of ammonia from wastewater generated in a waste treatment plant by a membrane contactor was studied at lab scale. The treated wastewater will be applied in the Hydrogen and Oxygen production by electrolysis via renewable energies. The aim of this study relies on fulfill the process requirements in the electrolysis, since the water used in the electrolysis process must be almost pure water due to efficiency process of Hydrogen and Oxygen production decreases with the ions in the dissolution. The residual ammonium concentration of the aqueous stream feeding the membrane distillation step ranging between 1 to 5 ppm is not removed and arrives to the electrolysis step generating an increase in the conductivity. So the use of a liquid-liquid membrane contactor is proposed to reduce ammonium (NH+4) concentration before membranes distillation step. The experimental set-up was performed by a contactor (Liqui-cel X30 HF (Celgard, USA)) which works in close and open loop mode configuration. In close circuit, it was used a tank of 10 liters to storage ammonium solution and in open circuit it was used 25 liters as initial ammonium volume. A pump (Cole Parmer instrument) was used to feed the contactor from the tank. An aqueous ammonium solution with a low concentration is in the inner side of the membrane contactor (Lumen) and sulphuric acid solution goes in the outside of the membrane contactor (Shell). The pH plays a very important role in the chemical equilibrium; for that reason is motorized during the experiments. On the other hand, it has been carried out the simulation of a mathematical model used by various authors to validate the experimental results by COMSOL Multiphysics program
SubjectsSewage -- Purification -- Ammonium removal, Membranes (Technology), Electrolysis, Membrane reactors, Aigües residuals -- Depuració -- Eliminació d’amoni, Membranes (Technology), Electròlisi, Reactors de membrana
DegreeMÀSTER UNIVERSITARI EN RECERCA EN ENGINYERIA DE PROCESSOS QUÍMICS (Pla 2009)
URIhttp://hdl.handle.net/2099.1/18480
Collections
Share: