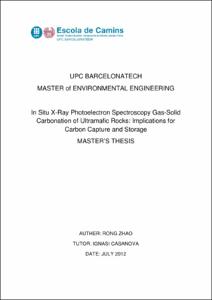 Except where otherwise noted, content on this work is licensed under a Creative Commons license : Attribution-NonCommercial-NoDerivs 3.0 Spain
Abstract
[ANGLÈS] With the increasing carbon dioxide emission in the atmosphere, there has been an interesting interest in CCS (Carbon Capture and Storage). Mineral carbonation was considered as a better option for storage atmospheric CO2 to slow climate change down. It’s a better method for storing CO2 without re-releasing CO2 in the atmosphere. The reaction rate of carbonation is too slow to be used at industrial scale under natural conditions containing ambient temperature and pressure. Several pilots were done to study and observer the reaction rate of carbonation with various conditions. In this study, we used the ultramafic igneous rock (such as pyroxene and dunite) containing amounts of magnesium and calcium which could react with atmospheric CO2 to form stable carbonates into geological formations. We did the gas-solid carbonation experiment without water-dissolution that was used by amounts of researches in the worldwide to observer change rate of carbonate produced under various CO2 pressures. By understanding of the previous researches and papers, we knew mineral carbonation in situ has higher carbonation rate relative to rate at 25OC in atoms CO2 saturated water at 1 bar. We used X-ray Diffraction to understand compounds of the sample in the depth and X-ray Photoelectron Spectroscopy to investigate carbonates produced change in the surface of the samples during the mineral carbonation process. The main aim of this thesis is to evaluate characterization of the sample (including Pyroxene and Dunite) and mineral carbonation procedure in various pressures at 185 OC. The quantitative ratio [CO3 2-]/C for each sample in different reaction conditions has been determined from an analysis of the C 1s spectra of XPS. The XPS observations showed the same behaviors for the two types of ultramafic igneous rock: the ratio of carbonate to carbon in the surface of the samples at 5 bars is higher than at 1 bar. In addition the ratio of carbonates to carbon after the heating treatment decreases a little, and then the value would increase after the carbonation procedure. That means the carbonates were removed by the heating treatment.
SubjectsCarbon dioxide, X-Rays, Anhídrid carbònic, Raigs X
DegreeMÀSTER UNIVERSITARI EN ENGINYERIA AMBIENTAL (Pla 2014)
URIhttp://hdl.handle.net/2099.1/18389
Collections
Share: