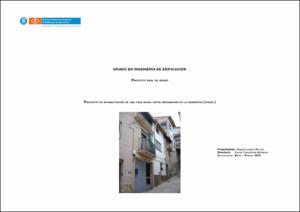 Document typeBachelor thesis
Rights accessOpen Access
Abstract
This project consists of four parts. The first part is the building diagnosis, in which the current strength of the structure has been valued and this was compared with the resistance that should have according to safety requirements indicated in the legislation. To determine the resistance, lesions have been observed in each of the beams to know their useful diameter, cracks in load-bearing walls to see if they were still capable of supporting loads. Also has assessed vertical communication status, partition, carpentry, wall and floor tiles. In the second part, the thermal behaviour of the current surround was calculated, in the soil so as to vertical enclosure and roofs to see if they met the requirements of energy saving. Closings which didn’t meet have been given a solution. The third part is the proposed intervention which consists in uniting the three houses in a rural house with a restaurant on the ground floor. Therefore, we have calculated the structural reinforcement, distribution and forecast space for facilities. In constructive memory has detailed the steps in the proposed actions. The fourth part consists of annexes, where they meet both the current structure recalculation and the structural reinforcement calculation which is intended to.
SubjectsDwellings -- Remodeling, Habitatges -- Remodelació -- Teruel -- La Ginebrosa, Cases rurals -- Remodelació -- Teruel -- La Ginebrosa
Location
1: 44643 La Ginebrosa, Teruel, Espanya
URIhttp://hdl.handle.net/2099.1/18278
Collections
Share: