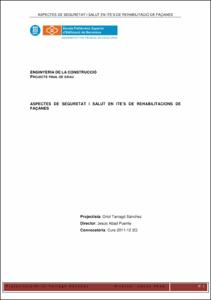 Document typeBachelor thesis
Rights accessOpen Access
Abstract
Most of the house users are not conscious of the idea that during the life of a building, it becomes old because of its own use and the past of the time. It’s because external agents or little accidents that the building suffers a degradation. There is no user’s conscience in the idea of giving a building, as equal as a house, a minimum of periodic attentions. Doing that, all the necessities and benefits would be sufficient to have a comfortable living. In order to ensure the correct conservation of buildings between 30-50 years old, many autonomous communities and some city halls have issued norms regulating obligatory reviews. On last November 23rd , Decree 187/2010 of Technical Inspection of Buildings was approved by the Catalonian Government. It is an obligatory review to all multi-family housing depending on their age. According to the Decree, all technical inspectors have to put attention on those parts in a building were the possibilities of problems or injuries over time are more likely to appear. Those parts are foundations, structural elements, roofs, building services and façade. The façade is an important element in a building, because of its essential function to guarantee the habitability and security of the building. The envelopes are considered as the skin of the building and they allow the interiors to be ventilated and illuminated. Because of this fact, it is necessary to make an accurate security inspection of the construction of the façade, as well as its cantilevers and the finish materials. A clear example of reason for accurate inspection of the façades is the appearance of fissures or cracks. The elements are a potential danger source for home users, as well as for pedestrian that walk thought streets. Once studied the different kind of pathologies that can appear in a façade, it will be studied which risks entail to do the appropriate actions in order to solve these problems. That is why we will have to first carefully analyze which are these actions and which are the tools and auxiliary methods necessary. Once analyzed the risks, we will do a table to know which risks entail each action and which are the mending measures to take in each case, in order to give technicians a detailed vision of every type of action.
SubjectsHousing rehabilitation, Facades, Buildings -- Maintenance, Rehabilitació de l'habitatge -- Catalunya, Façanes -- Manteniment i reparació -- Catalunya, Edificis -- Manteniment i reparació -- Catalunya
ProvenanceAquest document conté originàriament altre material i/o programari no inclòs en aquest lloc web
URIhttp://hdl.handle.net/2099.1/18153
Collections
Share: