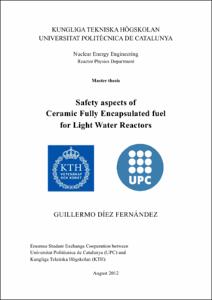 Show full item record
Díez Fernández, Guillermo
Tutor / directorGudowski, Waclaw
Document typeMaster thesis (pre-Bologna period)
Rights accessOpen Access
All rights reserved. This work is protected by the corresponding intellectual and industrial property rights. Without prejudice to any existing legal exemptions, reproduction, distribution, public communication or transformation of this work are prohibited without permission of the copyright holder
Abstract
Japan’s nuclear disaster has highlighted important inherent weaknesses regarding to the nuclear fuel behavior after shutdown in Light Water Reactors. The low thermal conductivity and the low fission products retention capacity of oxide fuel, combined with important amounts of zirconium in the clad, lead to an uncontrollably soon fuel failure after losing the coolant inside the core. The purpose of this thesis is to study the feasibility of replacing current oxide fuel used in Light Water Reactor with an alternative fuel that performs a better behavior under these accident conditions. The alternative fuel studied is the Fully Ceramic Micro-encapsulated (FCM) fuel based on the TRISO particles technology, which enhances safety after a loss-of-coolant accident because of its better thermal conductivity and fission products retention capability. The aim of the project is to compare the neutronics behavior and safety parameters between the current 17x17 Westinghouse fuel assembly and a new fuel assembly model, designed to replace the original but using FCM fuel. The analyses have been done using the SERPENT code, based in the Monte Carlo probabilistic methodology. The thesis is mainly divided in three stages. The first part involves the design of the fuel assembly models desired to benchmark, with especial attention to the description of the FCM fuel configuration, result of a compatibility study with the original. The second part is addressed to obtain all the simulation parameters decided to use for the following calculations. The last part is focused on analyzing the results obtained from these simulations, especially comparing the safety parameters between both fuel configurations. The final results show a better behavior of FCM fuel regarding to the neutronics under accident conditions. However, temperature feedbacks tend to be more positive with the new fuel, especially at the end of the cycle and with a significant concentration of boron in the water.
SubjectsNuclear reactors -- Safety measures, Nuclear fuels, Reactors nuclears -- Mesures de seguretat, Combustibles nuclears
ProvenanceAquest document conté originàriament altre material i/o programari no inclòs en aquest lloc web
DegreeENGINYERIA INDUSTRIAL (Pla 1994)
URIhttp://hdl.handle.net/2099.1/18063
Collections
Share: