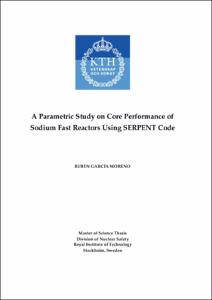 In this thesis, a parametric study was performed for four core designs of Sodium Fast Reactors (SFRs) in two different sizes: the large core of 3600 MWth with oxide or carbide fuel, and the medium core of 1000 MWth with oxide or metallic fuel. The Monte Carlo code SERPENT is chosen in the simulations, and the following global safety parameters are calculated at the beginning and end of cycle: - core multiplication factor; - sodium void worth; - Doppler constant; - effective delayed neutron fraction; - control rod worth; - average nuclide concentrations for end of equilibrium cycle; - radial power distribution. The calculated results show that the four cores remain slightly supercritical through the whole equilibrium cycle, with the multiplication factors being close to unity. The sodium void worth increases as the burnup is taking place. The Doppler constants are quite different for the four cores, ranging from -1.2 (EOC of metallic core and BOC of carbide core) to -2.1 (BOC of oxide core). The effective delayed neutron fractions are similar for all the four cores. The control rod worth for the medium cores is much higher than that of the large cores, due the greater ratio of control assemblies to driver assemblies in in the medium cores. The data of average nuclide concentrations at EOC indicate that the transuranics conversion ratios in the large cores are greater than those in the medium cores. Over time the power tends to increase in the inner core and keeps constant or decreasing in the outer core. The library of cross sections appears to have a significant impact on the simulated results. This implies the importance of having the right data for the cross sections.
SubjectsNuclear reactors -- Cores, Nuclear reactors -- Mathematical models, Monte Carlo Method, Reactors nuclears -- Nuclis, Reactors nuclears -- Models matemàtics, Monte Carlo, Mètode de
URIhttp://hdl.handle.net/2099.1/18031