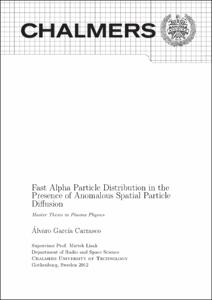 The high-energy alpha particle population in an ignited D-T fusion plasma may cause thermonuclear wave instabilities, which could lead to anomalous losses of plasma energy and of energetic alpha particles. On the other hand, the high-energy alpha particles have to provide self-sustained heating of the fusion plasma. One of the possible excitation mechanisms of the wave instabilities is associated with an alpha-particle velocity distri- bution function that is non-monotonically decreasing. The aim of the present master thesis is to study the essential condition for the occurrence of this type of instability, when the alpha particle distribution can become inverted with a larger phase-space density of high-energy than the lower energy particles. Such situation can arise in the presence of anomalous spatial losses of alpha particles or/and in the presence of external fast plasma heating. By solving the generalized Fokker-Planck equation for alpha particles with spatial di usion, a criterion for achieving an inversion of the velocity alpha particle distribution function is obtained and analyzed.
SubjectsParticles (Nuclear physics), Alpha rays, Thermonuclear fusion, Partícules (Física nuclear), Raigs alfa, Fusió termonuclear
URIhttp://hdl.handle.net/2099.1/17944