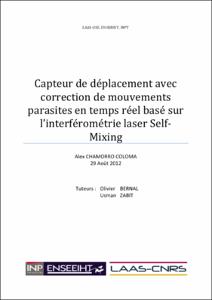 Show full item record
Chamorro Coloma, Alex
Tutor / director / evaluatorBernal, Olivier
Document typeMaster thesis (pre-Bologna period)
Rights accessOpen Access
Abstract
The present manuscript describes the process followed to carry out the last part of a displacement sensor implementation. The mentioned sensor is based on the self-mixing (SM) interferometric laser effect that is capable of providing correct target measurements in real-time even when it is subject to extraneous parasitic movements. Self-mixing interferometry is a measurement technique, in which a laser beam is reflected from an object, back into the laser. The reflected light interferes with the light generated inside the laser, and this causes changes in the optical and electrical properties of the laser. Information about the target object and the laser itself can be obtained by analyzing these changes. It is necessary to say that SM displacement sensors have traditionally needed a stationary support (such as an optical table and/or anti-vibration material) to guarantee an accurate target measurement as any parasitic/extraneous movement of the SM sensing laser system can corrupt the real target displacement measurement. So, keeping in mind such a limitation that can potentially limit the use of such optical sensors, a Solid-State Accelerometer (SSA) coupled Self-Mixing (SSA-SM) sensing system has been recently proposed that measures real target displacement even if the laser sensor is itself subject to a displacement. This system uses the SSA accelerometer to determine the movement that the sensor is subjected to. Then, the subtraction of this movement to total movement measured by the self-mixing intermerometry allows knowing the real motion of the target, but to perform this subtraction the two signals should be in phase. A first prototype allying the signal obtained from the accelerometer and the signal obtained from the self-mixing interferometry has been created, and verifications have been done using a filter implemented in MATLAB which allows to perform the calibration on the two real signals and calculates the corrected displacement. The main objective is then to implement this idea and to validate in a practical way the operating principle of the sensor that had been validated using MATLAB. To do this, the signals have been processed in the digital domain, as it is much more practical to use digital filters to correct signals. A dsPIC has been used to perform this task. The report begins by introducing the physical operating principle of the sensor, based on the SM interferometry, the interest of its study and developments for this application. Then it describes the proposed method, its scope and the starting point of this study. The employed components such as the dsPIC33FJ128GP802, the development tools used for programming and the computer interface are mentioned and their main characteristics are explained. First, the correction and subtraction of the two signals has been implemented in the dsPIC, which takes care of band-pass filtering and phase and gain corrections needed to do that. The methodology used was to create a program step by step, starting with a simple program that only received and sent a signal (through analogical to digital converters and vice versa) , after introducing a filter and finally, a program that received ,filtered and sent two signals. At that point, real samples have been used in order to calculate the phase and gain mismatches and create a filter to compensate them. Once the filter is done, the subtraction code has been implemented and good results have been. obtained for different cases although the accelerometer signals were still conditioned by analog elements. This has led to completely digitalize the sensor part responsible for obtaining the displacement signal from the accelerometer. Initially, a double analog integration was used to obtain a displacement from the acceleration signal. To digitalize this operation, the filter characteristic of an integrator has been programmed in the dsPIC twice, in serial mode. Finally, the integration and filtering parts have been added in a single dsPIC, providing much better results than before. An accuracy of 100nm has been achieved, achieving the removal of 97,18% of the parasitic signal over the frequency range of interest. A paper has been drafted and accepted, and a place at a conference called IEEE Sensors Conference, on the 28-31st of October 2012 in Taiwan, has been granted to present this project. In addition, an optimization of two aspects of the sensor has been done. In the first one, the accuracy of the filter has been increased due to the higher number of coefficients that has been achieved (from 1500 to 1790), through the use of a special feature of dsPIC : the use of a part of the program memory, called PSV (program space visibility), as a data memory. In the second one, the expansion of the range of frequencies where the SM interferometric signal is able to be unrolled has also been increased. The first proposed SSA-SM sensing system uses Consecutive-Samples based Unwrapping (CSU) to process the SM interferometric signal accomplished in a microcontroller, who limits this range to 2 kHz because of his performances and programmed code. Therefore, using the same method, a program that is able to detect the number of fringes of a self-mixing signal has been developed, so that SM displacement signals up to 34 kHz could be reconstructed. In conclusion, the operating principle has been validated. This results in a displacement/vibration sensing system that can be used for embedded applications as there is no more need of keeping the sensor stationary. Such an approach opens the way for the use of such laser sensors in conditions where the use of anti-vibration support is not available or possible. The proposed data fusion between the acceleration signal and the SM interferometric signal results in a robust sensing system. Hence, a compact, real-time, precise and self-aligned SSA-SM sensor has been designed that has a displacement measurement precision of approximately 100nm with a parasitic movement elimination of 31dB for a laser diode emitting at 785nm.
SubjectsDetectors, Laser interferometry, Detectors, Interferometria làser
URIhttp://hdl.handle.net/2099.1/17921
Collections
Share: