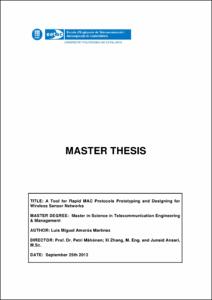 Document typeMaster thesis
Rights accessOpen Access
Abstract
Wireless Sensor Networks (WSNs)consists of several resource constrained sensor nodes distributed over an specific geographical area. WSNs are typically energy constraint due to the fact the sensor nodes are battery powered. Medium Access Control (MAC) protocols used in WSNs are usually designed to be power aware, i.e., they are more energy efficient than MAC protocols used for other ad-hoc wireless networks such as IEEE 802.11 [2]; to increase the lifetime of the nodes. Traditional MAC protocol implementations are done for specific hardware platforms using a monolithic approach. Therefore, it is very difficult to port from one platform to another without modifying the whole implementation protocol. This reduces code reusage and increases the implementation efforts. We have designed and implemented a toolchain which allows to design and prototype MAC protocols for WSNs in a simple manner. In addition, it allows non-specific sensors users to implement and execute them in sensor nodes without worrying about technical specifications of the platforms. The toolchain has been implemented in TinyOS using a component-based design. Special care has been taken to ensure hardware independence of the protocol implementations described in this thesis has been integrated with [1] to allow runtime reconfiguration of MAC protocols. We have evaluated our toolchain against monolithic implementations in terms of memory consumption and execution time. The results show that the toolchain introduces an acceptable memory and execution time overhead, less than 5 %, compared to the monolithic approach and substantially eases the implementation efforts.
SubjectsWireless sensor networks, Computer network protocols, Xarxes de sensors, Protocols de xarxes d'ordinadors
URIhttp://hdl.handle.net/2099.1/17506
Collections
Share: